The Stiftung für das Tier im Recht (TIR) is pleased with the newest publication in its series "Schriften zum Tier im Recht". The book "Animal Dignity Protection in Swiss Law – Status Quo and Future Perspectives" was written by Dr. Gieri Bolliger, executive director of TIR, and is the first comprehensive legal work that has been written in English on the concept of animal dignity in Swiss law.

The Swiss federal constitution has been protecting the dignity of animals for more than twenty years and, in 2008, animal dignity protection was also included in the national animal welfare act. The concept of animal dignity, which is still unique in the world, is based on the view that animals have an intrinsic worth that is to be protected regardless of any physical or mental stress. According to this concept, animals are protected from humiliation, excessive instrumentalization, and far-reaching interference with their outer appearance or abilities. This means that they are also protected from stress that is not necessarily associated with pain, suffering, harm, or fear.

Animal dignity protection is a milestone in animal welfare law and by granting animals a legally protected value regardless of their sentience it is an advance into a biocentric dimension. Accordingly, the concept has aroused great international interest. Volume 15 of  "TIR-Schriften zum Tier im Recht", entitled "Animal Dignity Protection in Swiss Law – Status Quo and Future Perspectives" is the first comprehensive legal work in English written on this subject. It highlights the basics, effects, challenges, and the possibilities of the animal dignity concept, and also its systematic classification in Swiss law. It also casts a critical eye on a number of shortcomings and demands various specific improvements in the realization and implementation of the concept.

The book is aimed at anyone interested in the continuous improvement of the legal protection of animals. It is meant to give animal welfare lawyers and legislators around the world food for thought, to inspire and motivate them to use the Swiss animal dignity concept as a model, and to adopt it into their own national legal systems in a form identical or similar to the one in Switzerland.

With its series "Schriften zum Tier im Recht", TIR wants to make selected monographs, surveys, and specialist articles on legal and ethical aspects of the human-animal relationship available to the broader public. The individual volumes are meant to serve as a source of information for academics, students, practitioners, and enforcement bodies on subjects relating to animal welfare law and animal ethics and also to contribute to scientific discourse. "Animal Dignity Protection in Swiss Law - Status Quo and Future Perspectives " will be available for purchase in bookshops (now also on Amazon) for 59 Francs or directly at TIR as of September 23. You can find all volumes of the TIR series in our Shop. 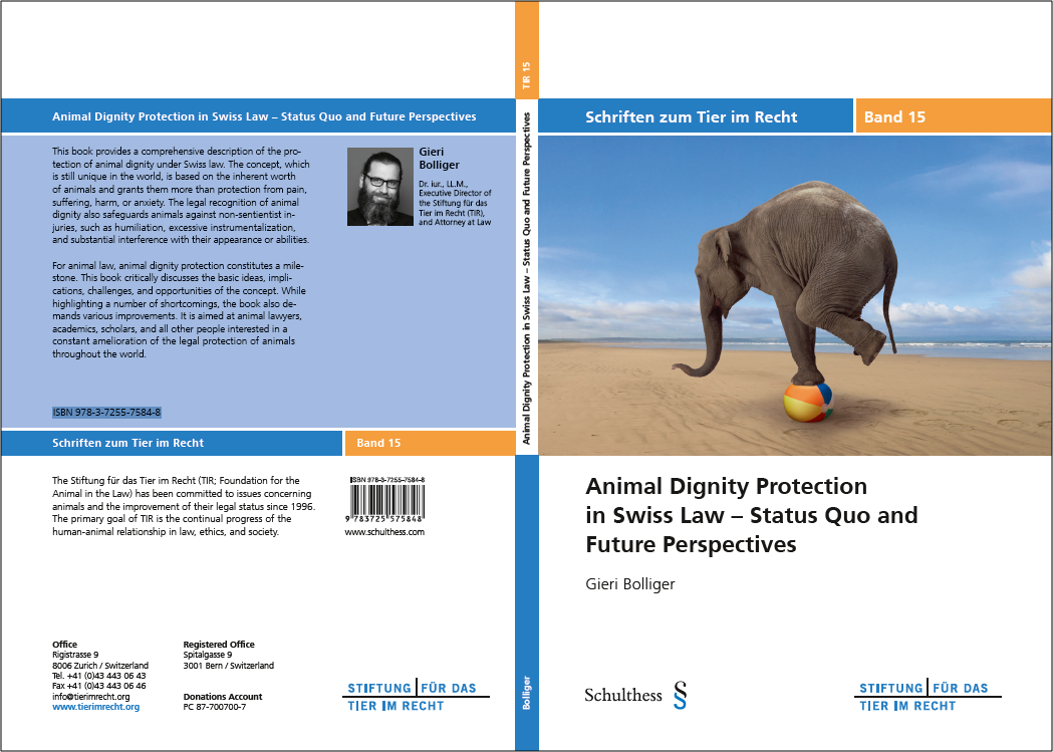